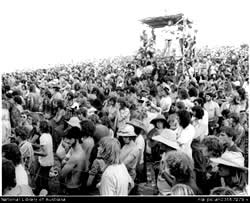 The BJC then secured every Pop Festival from 1970 starting with the ‘MIRACLE’ promoted by Melbourne entrepreneur Peter Stripes.

Three hundred BJC black belts with twelve motor bikes, ten horses and thirty well trained Rottweiler guard dogs from all over Australia and New Zealand travelled to Gosford and covered every security aspect of this festival, being the last, we made damn sure it was the best, all ‘security personnel’ had just as good a time as any of the ‘festival fans’.