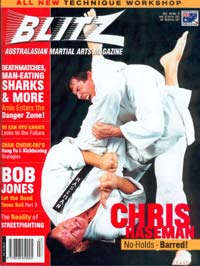 Interview in Blitz Magazine - Vol. 15 No.3
by Mark Castignini

In this third and final part of our interview with BJC founder and pioneer, Bob Jones, Bob fills us in on the future of the BJC and his kickboxing years.

It has been 30 years full of excitement and great developments in martial arts and Bob Jones has been at the forefront.

Mark Castagnini gets the story, but first recaps on Bob''s thoughts about government legislation and weapons bans.

BJ: I know the question was asked of me in the last issue, but I just wanted to regroup on this subject of our self defence/martial arts industry and its connection to weapons. It would seem to me that it is a matter of common sense. Every household is littered with a variety of objects that are capable of being used as a dangerous weapon, far too numerous to ever consider government legislation and the outlawing of every second utensil used in our day to day existence around the home.

Simplicity and common sense suggests to me that a Shinnae and Bokken or a Bo etc., standing next to a set of golf clubs in the study or in the son''s bedroom wardrobe next to a fibre glass baseball bat or in the garage next to a pick shovel would be no more dangerous than one or the other. It is not cars or even guns that do harm ...it is the human in control or lack of control.

If I play baseball or golf or I do gardening around my property, I am allowed to possess the above, I do not have the right to ignore the rules of society governing any of the above. Whether I am going to or coming home from baseball practice or a weapons class at my dojo, and I am not acting irresponsibly against our laws of the land Kai and our associated what are we even discussing here. If I have any of the above, away from my home , not within reasonable times of going to or coming from practice, and there is an infringement of any governing law, then of course I should suffer any legal ramifications of my actions.

MC: Bob, how has your own teaching style changed and what progressions do you feel you''ve made personally?

BJ: Several years ago, Steve Nedelkos, my Victorian Chief Instructor started organising various inter style training via seminars being held by people touring Australia. One of the early ones we attended was by Wally Jay with his small circle defence system. I was so impressed we decided to become more involved with the various touring martial artists.

We pursued Rick Clarke and several of his pressure point seminars and found him extremely interesting. Then Vince Morris came out from England and was an immediate hit with his no nonsense street applications. Rick Moneymaker was most interesting with his theories of energy transferenceâ€¦between the three of these gentlemen''s world of knowledge, Zen Do Kai and associated BJC systems found many new interpretations of our Traditional forms (kata''s).

Along with these seminars, during the past decade we had a dozen trips to Thailand (see part 1 of the Bob Jones interview of this account of the influence of Thai fighters Tekkin Donmez, Rob Karmen and Ramon Dekker and their experience in Thailand). The superior techniques of Thai Boxing really improved a lot of our basic techniques, especially our stand up grappling.

Then Rod Stroud in WA raised the question of what happens in Zen Do Kai if our black belts fell to the ground with someone bigger landing on top of them.

It was decided to ask a favour of an old friend (John Will) who had recently earned his black belt in the Machado system ...and we began attending John''s seminars. Some of my black belts also began grappling classes with Peter de Been. Then an original student of Dave Berry''s and Billy Manne (down on Victoria''s peninsula), John Donoghue came home to Australia. These three have all been instrumental in improving BJC''s student groundwork ...especially John Will, who has been doing seminars for me all over Australia and New Zealand.

The next thing we felt our teaching style needed was a better understanding of weaponry. One of my managers, Peter Shannon suggested Escrima Kali from the Phillipines had a structure that would be suitable for improving our current fourth degree grading syllabus. We have since aligned ourselves with Doce Perez; this system has been invaluable and greatly improved Zen Do Kai''s fourth Dan standard.

For even more depth, and many new insights into our forms, plus an endless realm of historical facts and the intricate lineage of Asian Masters of the arts, we began working with Patrick McCarthy.

He and I also have a strong Irish (Celtic) connection, and it is in this area of ancient martial arts that we both share a passion. My own teaching style is constantly evolving along with Zen Do Kai and all of these masters of these various arts have been instrumental in these ''changes''.

MC: You brought kickboxing and Muay Thai to Australia, how and why did this come about.

BJ: During all of my early years of traditional training (1965-''70) I had felt that when the day came that I might earn the rank of black belt and start teaching that I might add some of my ideas and see if I could help my students learn a system that would transfer to street practically that anyone could learn. During the early years (1970-''75) of formulating Zen Do Kai, we experimented with many variations of contact training ...

After a few years of trial and error, we found the basics of boxing was the answer a boxing ring, using boxing gloves and the Marquis of Queensbury Rules slightly modified to incorporate kicking above the waist. This was the basis of full contact Karate and we staged our first event on September 9, 1976.

At the suggestion of Benny the Jet Urquidez in early 1983 we introduced kickboxing into Australia with the inclusion of leg kicks. Other than above and now below waist kicks, everything was based on conventional boxing concepts. Much to the displeasure of everyone connected to the world of boxing!

In 1986 during a world tour (fully paid for by Allan Bond for the Americas Cup celebrations in Perth) of myself and Rod Stroud ...we did some training with Tom Harinck in Holland, and he introduced us to Thai boxing. Two years later in 1988, I trekked off for the first of 12 trips during the following 10 years to Thailand. This was the beginning of Thai boxing as an Australian sport.

MC: Speaking of kickboxing, K-1 is now very popular and you actually judged the first K-1 in 1995. How did this come about and what do you think about the K-1 concept?

BJ: Stan Longinides was booked for the main event draw card supporting the first K-1 promotion of Mr Ishii''s in 1995. Stan''s manager at the time was Nick Kenos and he told Ishii they would not fight without at least one Australian judge. They said there would be no problems if I went over with them, and as Nick said at the time, I would also get to see that inaugural event.

As for what I think about the K-1 concept, the evidence is the proof in itself, the K-1 has just got bigger every year for the past six years. Don King paved the way many years ago by being the first promoter in the world to pay an athlete one million dollars ...He paid Ali ahead of any other sportsperson at the time one million dollars. King charged television sponsors .and a casino double that amount to be involved, paid all, kept as much for himself and then sold 25,000 tickets.

Listening to Mr Ishii talk via his interpreter at a prior meeting to that first K-1, he told us a story that I related to the above Don King story. Except Mr Ishii started at $100,000 and promised a million sometime in the future.

MC: What new martial arts innovations are there to come from the BJC in the short/long term?

BJ: Well, we''ve just covered kickboxing, Thai boxing and the K-1. Since 1976 kickboxing is well established on the Australian scene, since my world trip with Rod Stroud in 1986 Thai boxing is still gaining popularity on a national basis with very strong roots in Queensland, WA and New Zealand. Having been responsible for introducing both sports into Australia gives me great sense of pride. Since that first K-1 in Japan in 1995, I have watched Mr Ishii take this idea and develop it around the world. With careful planning Tarik Solak will take it to the next level. As for the BJC (Bob Jones Clubs), the gound fighting is finally spreading around my system.

With the recent stabbing murder (Lalor, Victoria) of Nick Serrevski, one of my 18 year old black belts (Shodan), we have picked up the pace of the Escrima Kali training for our students nationwide purely for self defence strategies against knife attacks.

Personally, I am back into training with a passion. I am training with a 30 year plus Aikido master, Mr David Brown. He is sharing his wealth and knowledge with myself and higher ranked instructors several mornings a week at my house, which is really a giant training centre (dojo). His Aikido is extremely effective and practical, but the big bonus is its flowing principles of internal strength really suits some of us ...our mature age disciples.

I''m excited as I see it as a direction for my next 30 years of training in the martial arts I hope to have some of the basics down for my upcoming extensive tour of Australia to promote my biography ''Let the Good Times Roll.''

MC: Bob, finally, 30 years have passed, what is the future?

BJ: The future for all Bob Jones Clubs is the web. I can''t turn on a computer (not my job), but when I look at the amount of work Steve Nedelkos and Tony Shearer (and associates) have done in establishing: www.bobjonesmartialarts.com.au and the plans they have for the future our website will be a Disneyland for all martial artists. Personally, I am writing a series of books. Part one of this series is an autobiographical trilogy of my life''s adventures and experiences. These are colour coded into the three primary colours: Red, yellow, blue (Physical, Psychological and of course spiritual).

The story of the yellow dragon will be the first book released on May 1 (Celtic Mayday).. As you may have already noticed it is titled ''Let the Good Times Roll''. It does not matter what style of training you are involved in, this is a book I believe, if you study the martial arts, you will enjoy.

Anyway, I would like to take this opportunity to thank Silvio Morelli, Mark ''The Hammer'' Castagnini and Blitz Magazine for giving me this ''space'' in their magazine allowing me to share some of my martial arts journey with you guys. Remember, whatever your art, train hard, stay strong.