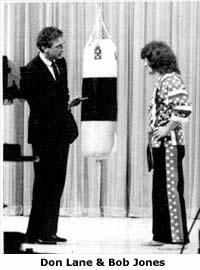 My first national television appearance was in 1970 on a show called ''Happening 70''.

The host of this show was Ross D Wylie, who was a good friend of Russel ''It''s The Real Thing'' Morris. Russel was a very dedicated martial arts student of mine at the time and he hooked me up with Ross and his production team.

This appearance led to the television producer Di Rolle at Channel Nine''s ''Don Lane Show'', booking me for her production which was an evening (top rated) family type entertainment show.

Eventually I would appear on Don Lanes Show five times over as many years, and a friendship with Don and his straight man Bert Newton evolved, which or course, led to appearances on several of Bert Newtons television adventures. 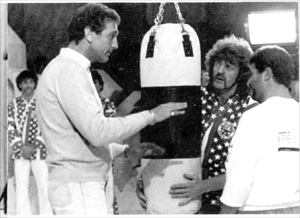 Don was a hands on kind of compere, and on every appearance I did for him he always involved himself in the physicalness of the occasion. This was certainly the reason (besides the push from Di Rolle) for my multiple appearances.