Mr Pat Condon, at the time was with Kevin Jacobson Promotions, when he bought the American production concept of The Gladiators to Australian television audiences. We had been personal friends for years via the entertainment promotion business, his sons had also trained with me in my martial arts organisation.

In the pre production days, Pat rang me and asked if I could play the role of ''The Eliminator'', meaning could I eliminate the hundreds of applicants down to an amount of ''potentials'' to select firstly, the soon to become super stars - Gladiators.

Then secondly, how long did I think it would take to ''eliminate'' many thousands of applicants in each in each state of Australia - to select each series contestants. Apparently in America and European cities it took months to perform these selections.

"One day" was my answer - Afterall, I had spent most of my life going around Australia constantly testing many thousands of my martial arts students for for their coloured and black belt gradings, and all that took one day.

When Pat Condon told his counter parts in America and Europe what ''his Eliminator'' was capable of they flew in from everywhere to see first hand how what took them a month, I could do in a day!

John Forsyth (www.intercepttraining.com/People.aspx), my associate in Sydney accepted the role to help do the eliminations.

John also became Head Trainer of the Gladiators and organised other associates of ours to be incharge of training the contestants to an elite level of fitness.

I then devised a series of exercises to test the fitness of these thousands of contestants in each state of Australia. It was a ''gruesome'' nine (9) minute program that eliminated 97 out of 100 contestants within the nine minutes...like I said ''Gruesome''. We still use this program today to test our kickboxers within the Bob Jones martial arts clubs. 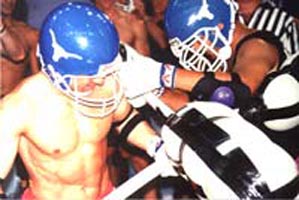 Pat Condon then sent me off to Malaysia for a national press conference to announce the coming national Malaysian Gladiator Tour. My process to find Gladiators and contestants for this tour was done in and around Kuala Lumpur.

My job done, I went home to Australia as John Forsyth bought in the Aussie Gladiators. After this tour they all went onto Europe for the World Gladiator Series and John was selected as the international referee.

Pat Condon has since formed ''Condon Entertainment'' and most recently he promoted a spectacular Chinese ballet in Australia - The Wild Zebra Ballet - produced by Shanghai Oriental TV Station.

Pat is currently in and out of China on a regular basis due to the fact his company is involved in the Opening and Closing Ceremonies of the Beijing Olympic Games in 2008.