Since the time of those early Don Lane Shows, a type of friendship has developed between Bert Newton and myself.

So much, that like Don, Bert has given me numerous appearances on his many shows over the years...most recently (Christmas 2002) he gave me a great introduction prior to introducing my autobiography ''Let The Good Times Roll''.

Back in the late nineties, long time associate of mine and good personal friend Robin Jolley was producer of Good Morning Australia. Robin had me teaching self-defence on a regular spot every Thursday for twelve months. Robin teamed up with ex Miss Australia Michelle Downes (who was also ex Mrs Peter Brock - Australian Champion racing car driver).

After about six months our fan mail had really picked up, and many of these women watching the show right around Australia said they loved my segment - One problem, I was always teaching Michelle in a standing position, but when women need self defence, most likely they will wind up in a lying down position...Could anything be done about this?

No problem, only solutions, I asked Robin Jolley if I could have a queen sized bed on the set as of the following week? 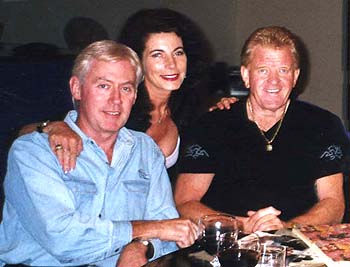 This way I could teach Michelle while we were both wrestling around on the bed. That first morning Bert Newton introduced us "Bob Jones and Michelle Downes on a bed together demonstrating self-defence, but know I ask you viewers, hasn''t Bob Jones got the best job on Australian television?" 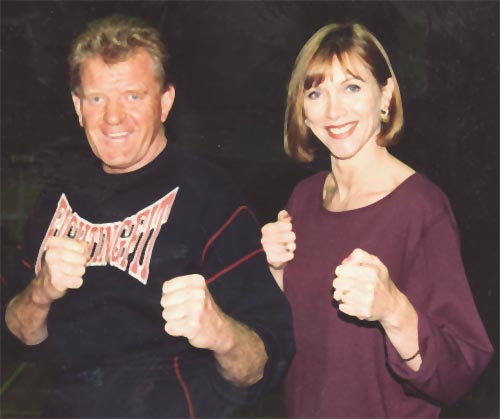 This is an interview Bob did with GMA''s host Bert Newton upon the launch of his book, Let The Good Times Roll

Back in the late eighties, Bert''s producer rang me about coming on the show to discuss rape statistics (this was not long after my first book release - ''Hands Off'' An Awareness of Violence Against Women) and to do a couple of easily applicable techniques on camera.

Unbeknown to me this producer had also invited a good friend of mine - the then current Heavyweight Boxing Champion Title Holder Dave Russell to assist me in this easily applicable technique.

As I arrived at the television station and headed for the ''green room'' for a cold drink, there was Dave Russell in a foul mood. As it turned out Dave was asked to "help Bob out".

At the rehearsal (a deliberate half hour before my set arrival appointment time) they said to Dave, "At this point you come out from behind this curtain and grab Bob in a head lock from behind."

"Great" says Dave, "When do we rehearse with Bob?".

"No, the point here is to suprise Bob and see how he reacts when he is suprised," replied the producer.

"Far que" says Dave "No way...I''d box him with gloves on for twelve rounds, but no way would I grab him from behind without him knowing about it", with that Dave stormed off. That was half the problem, the other half was he had a parking ticket on his car, hence his ''green room'' foul mood. "Dave, just relax - stay here and watch the segment - I''ll square it up for you."

It couldn''t have worked out better, towards the end of the segment I was teaching a female guest on the show how easy she could hurt me by applying a basic ''figure four'' wrist lock. I explained how I would ''tap out'' with my free hand when she had applied enough pressure to cause pain. Bert, totally unexpected challenged me to put this wrist lock on him to see how much it hurt.

Having demonstrated this technique at hundreds of seminars I knew exactly where and when it would hurt...a fraction beyond this point had Bert leap out of his chair and almost say "far que" live on television (just as Graham Kennedy had done with Bert on ''In Melbourne Tonight'' many years earlier).

Dave Russell had also ''convinced'' management to pay for his parking ticket, we both went home extremely happy.

For the next couple of weeks on his show Bert Newton was shaking hands with his guests left handed, with his right wrist all bandaged up, he often told guests "Recently I had this karate guy on the show and..."