As our Qantas flight landed in Japan, the whole band broke into spontaneous laughter. Everyone had left their seats and were tripping over one another to peer through the aircraft’s porthole windows to a banner that read:

The message ‘Welcome to Tokyo’ was printed in small letters across the top of a large horizontal canvas banner, which hung off the side of the airport lounge, in the distance, as we taxied alongside on the runway.

The Japanese promoters had no problem linguistically with the ‘L’ in ‘welcome’, but the spelling of the band’s name had been a serious attempt at Western humour. It’d worked, not only on the band, but on everyone on the flight. Everyone was laughing as cameras flashed from one end of the plane to the other. However, many tourists entering Japan may have been laughing because they’d thought Freetwood was a spelling mistake.

Every morning I’d go swimming, convalescing the knee. While thinking about the advertorials on late-night television, where busy people got fit running on a machine, or pedalled like mad on a stationery bike, I had this image of swimming, non-stop, the second leg of a triathlon. A simple harness, securing the elastic band to either the waist or shoulders could be used to cater for either aerobic or anaerobic training. This gave birth to the swim-a-sizer concept.

Christine was very impressed and suggested we make tracks straight to her lawyer, Mickey Shapiro.

Shapiro suggested he’d start the basic legals and we should get some quotes for the production of the shoulder harness, including the basic surfies’ elastic cord, straps, Velcro, buckles and packaging. During this period Dennis and I’d visited the Federal Bureau of Investigations (FBI). Two Aussies, (one with a limp!) wanted to research violence against women.

Sure, you could see them thinking, let’s keep an eye on these two characters. And they certainly did!You could feel the cameras as Big Brother followed us every inch of the way. True to our word, we found more than we needed, and the cameras recorded every God damn thing.

One day we were over at Stevie’s, and she’d asked how it was coming along. She was keen to understand the concept of how I intended to make it a train-at-home-alone manual.

‘How about a photo shoot of you and me for the cover?’
Swear to God, I honestly meant this to be a throw-away line.

‘It all sounds fabulous! I’d love to!’

‘Great Stevie, I’ll ring your publicist to do a photo shoot here by the pool.’

‘Macho charisma,’ Dennis joked. ‘He makes me walk on fire, jump off cliffs and swim across the deepest rivers. To him, what’s a coupla fucking photos: he’s the Chief!’

Stevie’s publicist had one of those special LA laughs: the one they use when they don’t think the situation at hand is all that funny. 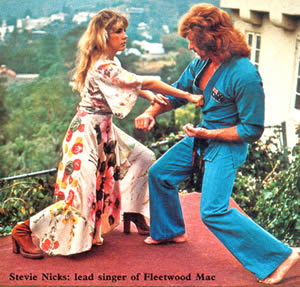 On this day of the shoot I was standing in my martial arts training uniform, wearing my Black Belt. Then Stevie appeared, her hair done to resemble the mane of a lion. She was psyched up for some serious photographing. Stevie wore her familiar thick-soled, thick-heeled, knee-high brown suede kid leather boots. High roll-over socks appeared over the top of these elegant Swedish boots and hung tentatively around her knees.

The seductiveness of her partially exposed cleavage was the next thing any red-blooded male would have his attention drawn to Stevie also had on the most unusual dress, with a snow white multi-layered, multi-lengthed hem-line. The white chiffon had multi-colored flowers. With the sun behind us during the shoot, Stevie would kick, sometimes over my head, so her dress would spread like a giant Japanese fan or butterfly wing.

In these kicking-style photographs the sun also made her dress partially see-through: just enough to be artistically interesting.

''My book Hands Off! is centered around nine mnemonic movements, I need a shot of each one’, I’d told the publicist.

‘That sounds easy. We’ll do six to ten of each pose, that’ll give you a good selection.’ She then checked the light and selected several different lenses for the camera set-up.

This lady was a professional: in two hours I had a hundred of the most magnificent photos ever offered to the martial arts, and just one would make the cover. I remembered what her publicist said. That a magazine had recently offered Stevie a quarter of a million dollars, and that she’d knocked it back.

‘Thanks a million, Stevie!’ - What else could I say? 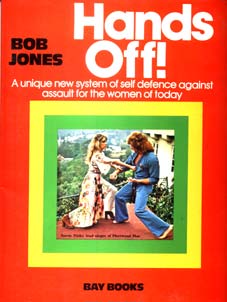 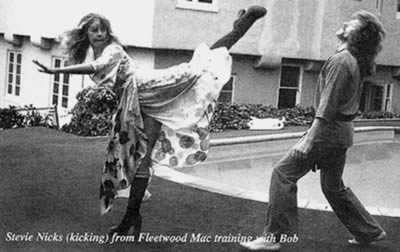 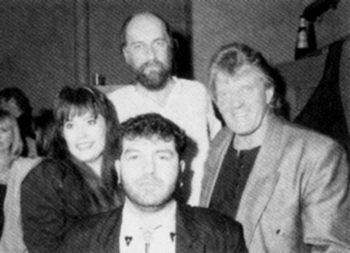