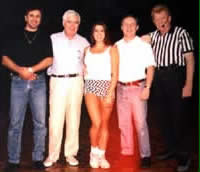 In 1995 Bob Jones and the BJC were contracted by Mr Pat Condon (then of Kevin Jacobsen & Associates in Sydney) to supply Channel 7 with all of the Gladiators and Contestants for the first series of the GLADIATORS. This enjoyed maximum ratings and was cancelled only due to the high cost of production at that time.

Even without her blue hair and serpent skin, Ms Sarah ‘Missy’ Howett is a very competent female western style Shootboxer, Kickboxer and also a competent Shootwrestling CAGEFIGHTER. She is developing awesome power from her GLADIATOR and intensive KICKBOXING training. As a result she has won most of her matches with decisive KO’s (Knock-Outs).